Home > Blu-ray > What Are the Top 4K Blu-ray Movies to Watch?

What Are the Top 4K Blu-ray Movies to Watch? 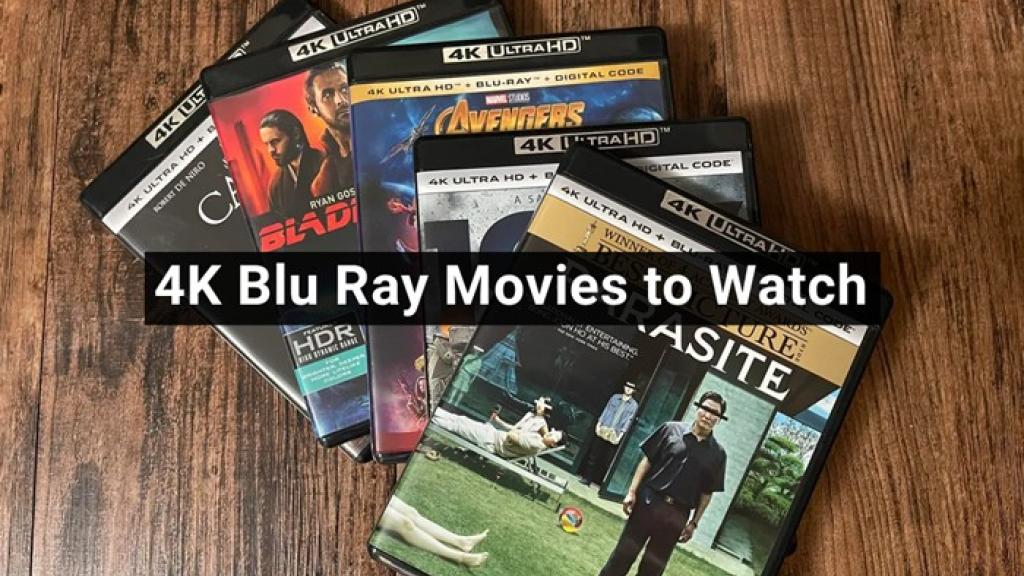 If you're looking for the best 4K Blu-ray movies to watch, look no further! In this article, we will discuss some of the best options available. With stunning visuals and incredible sound quality, 4K Blu-rays are the future of home entertainment. Whether you're a fan of action movies or romantic comedies, we have something for everyone on this list.

Plot: Winner of three Academy Awards, including Best Picture, The Revenant is a must-watch movie in 4k Blu-ray format. The film follows the story of Hugh Glass, a frontiersman who is left for dead after being mauled by a bear. Despite the odds, he manages to survive and embark on a quest for revenge. The film has a captivating story as you follow Hugh Glass on his journey.

The visuals are breathtaking, especially when watching in 4k Blu-ray. The level of detail is incredible, and you feel like you're right there with Hugh Glass as he's fighting for his life.

The sound quality is also top-notch, with each scene having its unique soundtrack that immerses you in the movie. Overall, If you want to see what the hype is about, The Revenant is a great movie to start your 4k Blu-ray video viewing experience.

Plot: The movie is about an astronaut, Mark Watney, stranded on Mars after his crewmates are forced to evacuate the planet. While trying to find a way back to Earth, Watney must use all of his ingenuity and resourcefulness to survive the hostile environment of Mars.

The Martian is one of the best 4k Blu-ray movies out there, and it is an excellent example of what a great science fiction movie should look like. It's exciting, suspenseful, and full of fascinating scientific concepts. Every scene on Mars is incredibly detailed, and the HDR color pops on a good 4k Blu-ray TV. Even if you're not into sci-fi movies, The Martian is worth watching for the visuals alone.

Plot: The film starts in a post-apocalyptic wasteland where two tribes are warring over what little resources remain. Max is captured by the War Boys, a group of men who serve Immortan Joe, the authoritarian leader of one of the tribes. He's used as a "blood bag" to transfuse Joe's troops with fresh blood and sent on a mission to capture Imperator Furiosa, who has gone rogue with Joe's harem of wives.

Plot: Skyscraper is a 2018 action movie starring Dwayne Johnson as an amputee who must save his family from a burning skyscraper. The movie was directed by Rawson Marshall Thurber and starred Neve Campbell; this is perfect if you are searching for the best UHD 4k Blu-ray movies.

The movie was shot entirely in IMAX, and the Blu-ray release includes an IMAX version of the film. Skyscraper is one of the best-looking 4k Blu-ray movies lists and features some incredible visual effects.

Plot: During the early days of World War II, Allied soldiers from Britain, Belgium and France were surrounded by the German army and evacuated in a massive military operation from the beaches of Dunkirk, France.

Dunkirk is the best war movie in recent years, and its Blu-ray release includes over an hour of bonus features. You can expect great visuals and audio on this release. If you watch this movie on Blu- ray, you will be able to see and hear things you would have missed on a regular DVD. This 4k Blu-ray movie makes every blood, sweat, and tears visible.

Plot: In Zack Snyder's Justice League, determined to ensure Superman's ultimate sacrifice was not in vain, Bruce Wayne aligns forces with Diana Prince with plans to recruit a team of metahumans to protect the world from an approaching threat of catastrophic proportions.

The task proves more difficult than Bruce imagined. Each of the recruits must face the demons of their pasts to transcend what has held them back, allowing them to come together, finally forming an unprecedented league of heroes.

You can find Zack Snyder's Justice League in many lists of UHD 4k Blu-ray movies. This is an epic movie with great visuals and an amazing cast.

Plot: The plot follows Arthur Curry (Momoa), heir to the underwater kingdom of Atlantis, who must step forward to lead his people against his half-brother Orm, who seeks to unite the seven kingdoms against the surface world.

Aquaman is a 2018 American superhero film based on the DC Comics character of the same name, distributed by Warner Bros. Pictures. It is the sixth installment in the DC Extended Universe. The film's visuals are pretty incredible, and the story is solid. The acting is also great, with Jason Momoa, in particular, doing a fantastic job as Aquaman. The action sequences are well done and exciting, and the film is just a lot of fun.

Plot: The film tells the story of a group of astronauts who travel through a wormhole searching for a new home for humanity. The plot takes a turn when the Earth is no longer habitable, and humans are forced to find a new home.

What makes Interstellar great is its use of real-world science and its exploration of the human condition. The visuals in the film are stunning, and the acting is great across the board.

The story is complex and fascinating, and the film is just an all-around masterpiece, especially if you watch this in 4k, every little detail will be visible to you, and it'll be a new experience.

Plot: Dune is yet another film which is based on the popular book series of the same name, and it tells the story of a young man who must lead his people to safety after they're stranded on a hostile planet.

The visuals in Dune are breathtaking, and the film features an outstanding cast. Watching Dune in 4k is an experience you won't soon forget, as some scenes are truly unforgettable. You will see things that you never even knew existed.

Plot: The film follows Cole Young, a washed-up MMA fighter who discovers that he is a descendant of Hanzo Hasashi, a powerful warrior who fought in the Mortal Kombat tournament centuries ago.

When Outworld emperor Shang Tsung sends his best assassin Sub-Zero to hunt down and kill all the descendants of Hasashi, Cole seeks out Jax Briggs and Sonya Blade, and two more warriors with ties to the tournament stand a chance against Sub-Zero and save Earthrealm from destruction.

The Visuals Of The New Movie, while the Mortal Kombat games have always been known for their over-the-top violence, the new movie takes it to another level. The blood and gore are constant, especially in 4k Blu-ray, making for some pretty intense graphic scenes.

This list of 4K Blu-ray movies is our top pick. You can't go wrong with any of the above choices. All of them offer great value for money in terms of picture and sound quality and interesting bonus features.

Top 10 Blu-ray Decrypters to Remove BD Copy Protections
In this article, we'll recommend 10 best Blu-ray decrypters for you to salvage your collection of Blu-rays and remove any sort of Blu-ray protection. Check out our best product list now!
SahilSharma 2022-07-22
The 6 Best 4K Blu-Ray Player to Buy Right Now in 2022
The 4K Blu-ray player will deliver you the latest high-end visual results. Here are the top 4k blu ray players of 2022 for your fast pickup
Starry 2022-06-24
Blu Ray VS 4K - What is Best for You?
Looking to know the best one, Blu ray vs 4K UHD vs DVD? It will decide who comes out ahead in today's heated marketplace of entertainment technology.
Starry 2022-06-24