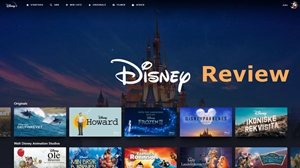 This page was created before Disney Plus released. It contains a preview, review and speculation about the future of Disney Plus. We promised an update and we are now delivering. Since Disney Plus was released, we have spent days putting it through the paces on various platforms to compile this detailed Disney Plus review. What did we discover? To find out, you'll need to check our Disney Plus review.

Signing up for Disney Plus is easy. Start a Disney Plus trial and log in to your account on the device that you want to stream. You can also sign up through Roku or another platform — though I wouldn't recommend that right now, for reasons that we'll cover in just a moment.

When I first visited Disney Plus, I created a username. Then, I chose an icon. Or, at least, that's what was supposed to happen — but my app (on Roku) was having trouble. Although I managed to get the username down, the app wouldn't load any icon options. So I stuck with the old-fashioned Mickey Mouse the app defaulted me to. After the initial rush I was finally able to modify my icon. Disney lovers will rejoice to learn that there are many options.

After creating my account, I was able to access Disney Plus on various platforms. There was a problem. Although signing up for Disney Plus is easy, it can be difficult to get your account set up on different platforms. You might have problems if you register through Roku, then log in to your account on another platform. It happened to me, and it wasn't just my case. I joined the solution.

Disney Plus features rows of titles, similar to Netflix. It does add a few content discovery tools that I like. Unfortunately, Disney Plus seems to be convinced, as most streaming services, that users do not care about the ability to sort titles quickly by genre and other obvious criteria. Disney Plus offers a number of shortcut buttons which will take users to content pages from major Disney brands. A Star Wars' button will take you to the page with Star Wars options. The Marvel button takes users to the Marvel Studios page. The content can still be broken down into specific rows on those pages. It was also possible to sort content into \"originals,\" \"movies,\" and \"series,\" as well as to explore themed \"collections,\" via the Search page — which also, of course, allows users to search.

Although the app is well designed, it was not always responsive. I didn't experience any streaming issues, but I did experience some serious slowdowns before I started streaming, while I was still choosing what to watch. Disney has done an even better job keeping streaming seamless than its apps experience.

While there are some things to be unhappy about, these are not deal-breakers. It works. That's all that matters. People don't really care about the app. It's the content which has made Disney Plus so important.

The Disney Plus is all about content. As Netflix found that making original content is the best way to operate a streaming platform, Disney has also discovered that it would make sense to own its own streaming site to maximize its content. Disney wasn't content with what it had. In a major deal, Disney bought most 21st Century Fox assets as a prelude for its streaming venture. This is undoubtedly the best-known media property collection on Earth.

Disney Plus makes full use of these properties. Disney explained that Disney Plus is their "forever home" and the home of Pixar, Marvel Studios and Star Wars films. On top of that, Disney is releasing some impressive-looking original series and films — including some that make use of those major media properties that the company owns. Disney Plus will house the Marvel Studios movies that are out now, as well as the original series and films from Marvel Studios' Phase 4 and Phase 5 (the films will not be in theaters until then). Star Wars fans can get the Star Wars movies and animated series "Star Wars: The Clone Wars" as well as new content such Disney Plus Original series "The Mandalorian" and later, the new season of The Clone Wars.

This makes Disney Plus an essential subscription service for Star Wars and Marvel fans. Disney Plus's content also makes a strong case to families — Disney is marketing it as a family-friendly streaming service, free of the more serious content that Netflix offers (Disney is keeping that stuff on Hulu) and bursting at the seams with the family fare that Disney built its brand on.

Disney still needs to have some original hits, even with its license content. To compete in a fragmented streaming market, it must be able to offer its originals. It's good news, the new Disney Plus originals look solid. The Mandalorian has not reached the Star Wars series' all-time highests (it is a very high bar).It didn't reach the famous lows. It had a bit of a Marvel Studios vibe to it — consistently solid, if not particularly risky. The Mandalorian feels just as costly as HBO, yet it doesn't feel as bold. However, its quality and competence keep it from being as boring as some of Netflix’s many and often forgotten originals. My sense is that Disney Plus will produce shows you love to watch, and shows that are worth your time. (Star Wars fan? Think more about the enjoyable and consistent 'The Force Awakens" than the flawed and daring 'The Last Jedi ). No company has been better at adapting to the Rotten Tomatoes era than Disney, which seemed to quickly recognize that earning a B or a B+ from every critic — and a 100% on Rotten Tomatoes — would be better than getting three A+s, one F, and a 75%. This movie is a perfect example of their formula. This is a good indicator of Disney Plus' quality original series. The future looks bright for the streaming service. (I must also mention that despite my somewhat cynical views on the Rotten Tomatoes period, I enjoyed "The Mandalorian !\")).

Some viewers noticed on social media that Disney Plus wasn't always as careful with its legacy programming. For example, old episodes of The Simpsons have been cut and stretched to make them fit on modern TVs. This is a series that aired in 4:3 format back when it was still popular. The old Mickey Mouse shorts from the past have had their analog glow removed and much of it has been restored.

Although Disney Plus has a smaller library than Netflix, its content is still top-notch. If there's anything to complain about, it's the fact that Disney Plus' gains have come at Netflix's expense — that the halcyon days of a cheaper Netflix that included just about anything you could want from Disney, Fox, and other media companies are now gone thanks to the arrival of streaming services like Disney Plus and (soon) NBCUniversal's Peacock. The streaming services landscape is not ideal for cord-cutters, as it has been splintered along the lines of media companies. You can't return home, they say. 2011 Netflix has gone. Disney Plus is a significant chunk of content that will be available in real life in 2022. This comes at a time in which it's becoming increasingly rare.

Disney Plus' launch drew a lot of fans — more fans, as it turned out than Disney was actually prepared for. Disney Plus was plagued by a variety of glitches on launch day that created social media buzz as well as some unflattering headlines.

However, it isn't unusual for a service to have some issues with traffic jams. This doesn't necessarily mean that they will be able to handle the daily demands of customers. Disney Plus performed well in our tests since its launch. The streaming of content has been smooth and reliable. This includes 4K content even when it was connected over Wi-Fi rather than wired.

Speaking of 4K content, Disney Plus has a fair bit of it, and it's available to every subscriber — there's no Netflix-style hierarchy here. Although the 4K content doesn't include every Disney Plus title, it is a good addition to Disney Plus.

From the start, Disney supported its platform with great support. The problem was almost too much: Disney Plus had a Fire TV App missing for a mere week prior to its debut. A last-minute agreement with Amazon allowed for the Disney Plus experience to be made available for all users of this very popular streaming service. It also completed Disney Plus' launch day apps on major platforms.

Disney Plus, as of the writing this, is currently available on Roku Fire TV Fire TV Apple TV Chromecast and Android TV. You can also access it on iOS, Android, and computers via a web application. Even video game systems are covered — PlayStation 4 and Xbox One, to be exact (sorry, Nintendo Switch fans).

What is the cost of Disney Plus?

Disney Plus' price stands out as one of its most distinctive features. Instead of attempting to compete with Netflix by offering a comparable service, Disney offers a lower price and is able to take on its established rival.

Disney Plus is $7.99 per Month, and is less expensive than Netflix. The cheapest Netflix plan is nine dollars per month. While the Standard plan is most popular at $13.99 per monthly, it is more affordable.

Disney offers customers the chance to save even more than that. You can save 16 dollars a year by purchasing Disney Plus at a discounted annual rate of $79.99 if you are willing to spend a whole year upfront. And if you want more than one streaming service from Disney, you can get three of them – Disney Plus, Hulu (the on-demand, with-ads version), and ESPN Plus — as a bundle for $13.99 per month. It's not surprising that this is the same cost as Netflix's most-popular plan.

The low price of Disney Plus is an asset in this market. You won't get more value from Disney Plus than with Netflix, but it's clear that you will not be getting more. The library at Disney Plus is also smaller. As streaming gets more fragmented, cord-cutters might want to manage multiple subscriptions. The cheaper and more affordable Disney Plus is a good choice in this world. This is despite any argument based on content hour prices. Disney also has a solution for people who are looking for an all-in-one Netflix experience, at a price that is affordable: the Disney Plus, Hulu and ESPN Plus bundles. This package works for anyone whose expectations of Netflix price ranges.

Disney Plus is not without its faults but its strengths are its content. Fans of Star Wars and Marvel franchises should be excited to join Disney Plus because it has sweet Disney IP. Throw in \"The Simpsons,\" classic Disney animated features, and some solid new original programming, and you have a great streaming service — one that costs less than competitors like Netflix, to boot.

There is less to be unhappy about with Disney Plus than the overall streaming landscape. It's creating more fragmented markets and is ensuring media properties stay loyal to their respective streaming services. The biggest media company has an advantage with streaming separated by media companies, and Disney Plus is a good example. Disney Plus streaming is essential, however it doesn't have to excite you.

This is our world at the end of it all. There are many streaming services competing for your attention. Disney Plus is a good option.

User experience
The Content
Streaming quality
Platforms
What is the cost of Disney Plus?
Verdict